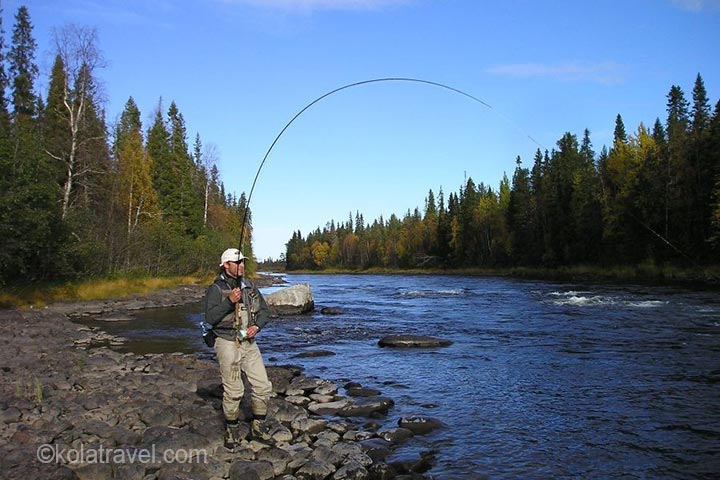 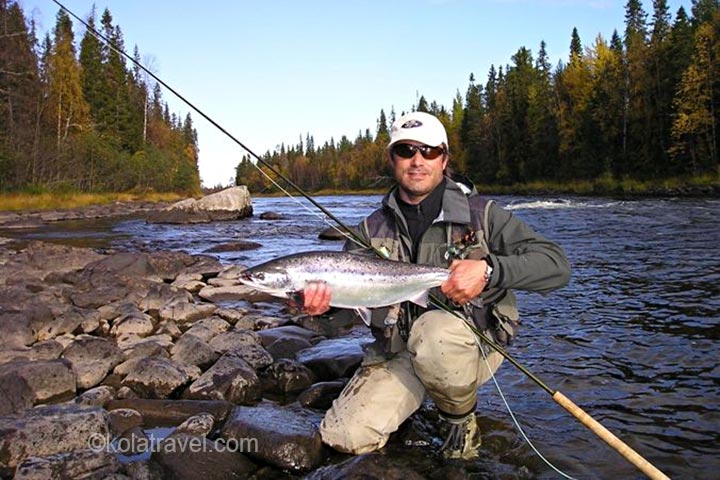 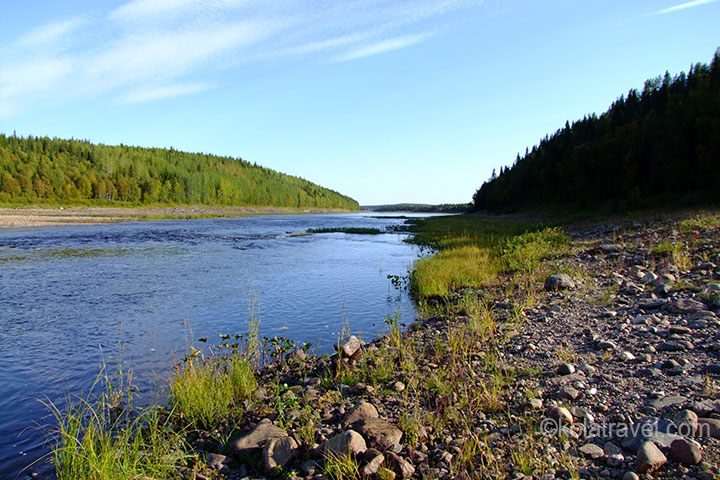 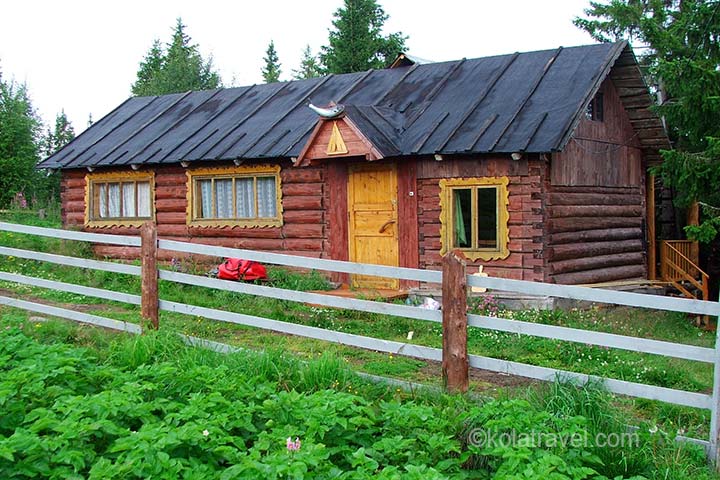 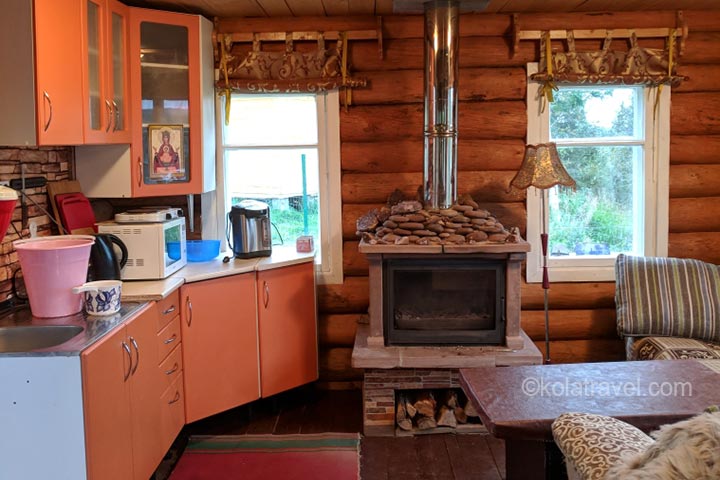 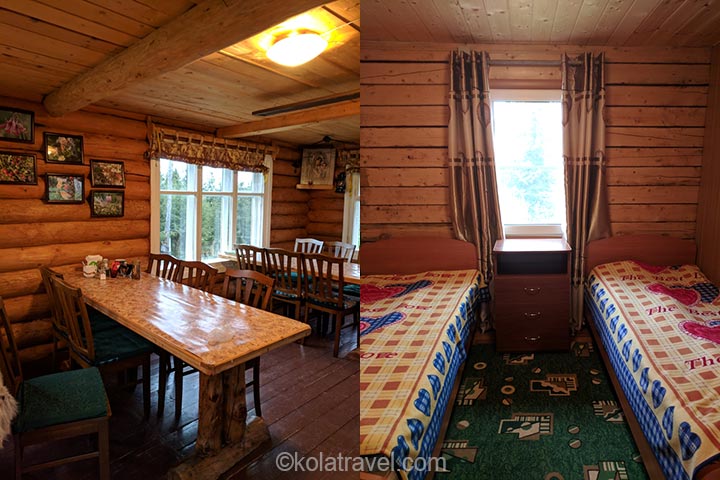 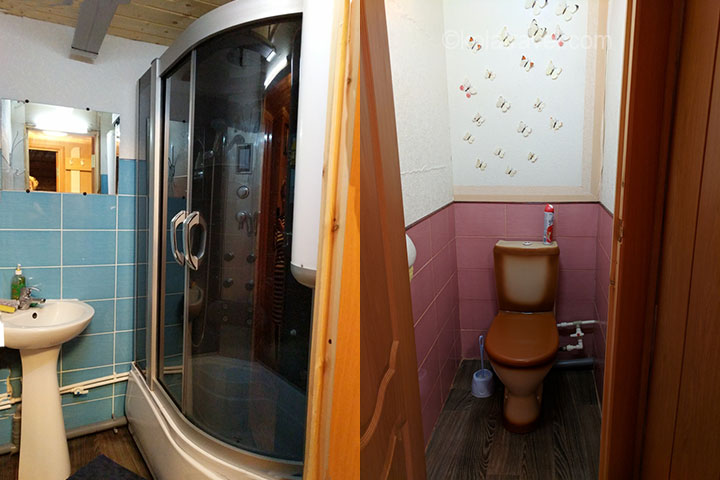 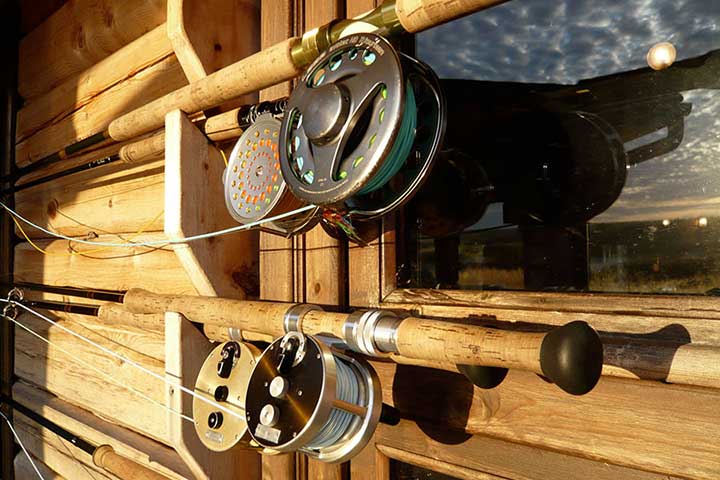 The fishing spot is about 35 km upstream where in fact all the Salmon swim over to spawn in the mentioned rivers and lakes. That makes your fishing trip a unique Atlantic Salmon sport fishing adventure.

Your home during your Atlantic Salmon Fishing Adventure will be in a simple log house in village Varzuga and is based on full board. Your host will serve breakfast, lunch and dinner. Every day you will be brought by small river boat to a good fishing spot where you can fish from the river bank. Optionally you can be guided the whole day. We provide the necessary fishing licenses which are based on "Catch and release".
.

First day: Arrival in Murmansk by plane or to Kandalaksha by train. Meet up with a car or a mini bus to drive to Varzuga village (500 km from Murmansk and 250 from Kandalaksha). It is recommended to have some sandwiches with you and some drinks on the way. Arrival in Varzuga and check-in at the guest house. Dinner and overnight (D).

Fishing days (any amount):  Breakfast. Get into a boat and go to the fishing spot. When you are 8 persons you can be brought by the boat in two steps. It takes 30-40 minutes to reach the place for fishing. When you are there you should buy a fishing license. You can buy it for one day fishing from 6 am to 12 pm or for more amount of days. Wilderness lunch during the day at the river shore. You can fish from 6 am up to 12 pm. You are brought back to the guest house at the time which you mention to the boat man. Dinner upon coming back. Sauna by request (Optional) (BLD).

Last day: After breakfast at 08.00 leaving Varzuga for Murmansk or Kandalaksha (B).

Your home for the duration of your salmon-fishing adventure. This cozy and beautiful guest house was built by a local family, using local timber and keeps the lovely aroma of resin. There are two sleeping rooms in the house: for two and three persons, a shower and a toilet. Sauna is in the yard.

Varzuga village is situated near on the northernmost section of the White Sea on Kola Peninsula, almost at the Arctic Circle. The village lies on the banks of the Varzuga River, 30 km from the White Sea. The earliest information on Varzuga dates back to 1419. Varzuga is a fishing village; earlier inhabitants also collected “pearls” from the river. Between the mid-15th and mid-17th centuries Varzuga was the property of the Solovetsky Monastery. By 1490 Varzuga had become a large village numbering over 150 dwellings, and it served as a major trading and fishing center for the region. It even had its own castle (which unfortunately no longer exists). In the mid-1600’s the Moscow Tsar confiscated some land from the Solovetsky Monastery including Varzuga.

At the end of April the ice on the river breaks and the fish start running in unprecedented numbers. Our season starts a week or two after the ice has broken in order to give the fish the best chance of filling the beats.

At the beginning of May the weather is changeable; some days can be cold whereas others will find us in shirtsleeves. Generally however, conditions tend to be mild as the Kola winter rapidly gives way to summer.

The first week of June is generally the cusp week, when we change from intermediate or sink tip lines to floaters. The weather is settled by now and, all things considered, the fishing is among its best. The following week we are definitely on floating lines with a great deal of water opening up for dry fly fishing, using bomber patterns or skated tubes. Wading is straightforward in most pools although a stick and a life vest are strongly encouraged.

July and August :During these warm months, the river is usually closed to Atlantic salmon fishing.

The late season on the Varzuga river is the time when the biggest salmon migrates to upper reaches of the river. This unique run of late salmon is extremely deep and powerful created by spending a full year in the river before the next year spawning. From the lodge you can see new fish coming into the Home Pool every day, jumping to challenge your flies. At the time one normally is fishing with sinking lines and big flies, we are doing better with small flies and slow intermediate or even floating lines. Although the days are shorter and the weather is more severe, the late season on the Varzuga river is unparalleled. By our knowledge, no other river on the Kola Peninsula can compete for the same numbers of truly big salmon as the Varzuga river in September and October.

This fishing program can be extended with the following optionals: